4 Things I Learned From Laguna Beach 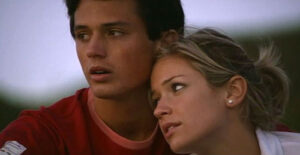 Don’t lie, you were addicted to this show too. You weren’t alone. And whether you left it in the past or still bring it to life on Retro MTV or Netflix, it’s never too late to look back at our favorite high school show and reminisce. This list will bring you back so far you will ask yourself: were you team Kristen or team Lauren?

Keep your friends close, and your enemies closer. The battlefield of Laguna Beach is strewn with the wreckage of broken friendships, be it from rumors, break ups, back stabbings, you name it. How could this be avoided? By being “friends” with everyone. Not taking sides or being the mean girl will get you far in a school ruled by cliques. Case and point: Alex H. and even Lo. No real personal beefs! These girls managed to fly under the rumor radar and mean girl scrutiny and thus were able to maintain friendships on all sides.

In a love triangle, give the dirty look to the guy instead. Whether it was Lauren, Kristen and Stephen or Jason and… well, everyone – while the girls were yelling at each other and handing out dirty looks like candy on Halloween, the guys almost always got off scott free. Why? Because the girls were too busy pointing fingers at each other to notice that they both merely fell into the same trap. When the girls fought they only fueled the fire for being labeled as dramatic and made themselves look bad, while the boys usually hit the surfed and laughed about it. My theory: if Lauren and Kristen had turned the tables on Stephen, it would have been an entirely different show. John Tucker Must Die, anyone?

Messy buns are always acceptable. The girls on Laguna made the messy bun look hot. Leave it to Kristen to pull out a few chunks of side bang, tie the rest up into a messy knot, and still leave with the hottest guy at the party. From Laguna we learned that messy buns worn with confidence are actually sexy buns in disguise. Channel your inner Laguna girl and rock a messy bun with natural makeup and heavy mascara and thing dangly earrings the next time you head out the door!

When in doubt, go to the beach. In Laguna, life’s a beach. No matter what the social scene throws at you, the beach is always appropriate. Just don’t pull a Casey and wear heels in the sand!

What did you take away from watching Laguna Beach? Who were your favorite cast mates? What was your favorite season? What do you miss most about the show? Share with us in the comments section below!