How To…Make Friends At A New School 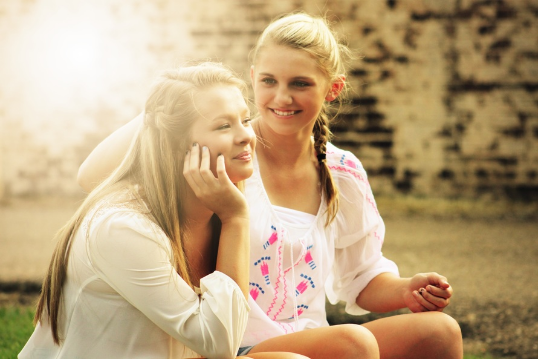 So, the new school year has started and everything is terrifying. Everything is new, loud, and moving really fast. Everyone else seems to know what they’re doing. Not only that, but you’ve left all the friends you’ve made over the years and are stepping into this maelstrom shivering and alone. Don’t worry, I’ve been there. This is the way it always starts. Moving to a new place, dealing with new situations, it always starts out scary and it always feels like it will stay scary forever. It won’t. Over the years and during many, many moves to new schools, cities, and even countries, I’ve worked out some tips for making friends. None of these are guaranteed, but I’ve found they at least increase my chances of making a solid group of friends within the first couple months of being at a new school.

When you first move to a new place, everyone you meet is going to be a stranger. This means if you’re going to talk, it’s going to have to be with a stranger. Most people aren’t comfortable having conversations with people they don’t know. This is totally normal. It gets drilled into us from when we’re little kids. Stranger danger. Don’t take candy from a stranger. Well, in order to start the process of making friends, you’re going to have to throw all that out the window and start from scratch. You’re going to have to start practicing talking to strangers. Yeah, that’s right. Practicing. Because you never get better at anything without practice. So if you’re terrible at starting conversations in the beginning, that’s okay. Remember this is a skill you’re practicing and keep trying.

This is how many conversations you have to start per day. If you’re really nervous and shy, maybe just one per day is good. If this seems like no biggie, then set yourself a higher goal to force yourself to keep trying if things go badly. The point is to make sure you try to start conversations with someone new. Every. Single. Day. You don’t have to do this forever, but it’s a good way of forcing yourself to make friends quickly.

If you don’t know how to start a conversation, try complimenting someone on something they’re wearing or asking someone for a quick favor. That last one sounds like it would be kind of rude, but I swear it works. Even something as simple as “hey, could you hold the door for a second?” can start a conversation. And it’s been scientifically proven that when someone does a favor for you, it actually makes them like you (it’s called the Ben Franklin effect).

3. Accept that you’re going to get rejected

It’s going to happen. Someone isn’t going to want to talk to you. It’s probably going to happen a lot. Don’t take it personally. Nobody has an actual right to anyone else’s time. But keep trying, again and again, with different people. Making friends is a numbers game, like almost everything in life, and the more times you try the more likely you are to win!

So, I like to think of there being something called “the newbie window.” The newbie window is the period of time in which it is totally socially acceptable to walk up to a stranger on campus and start a conversation. This is usually the couple months of the fall semester. The reason it isn’t weird to start talking to random people during the newbie window is because everyone is new. A ton of people are sitting around feeling awkward and wishing someone would come up and start a conversation with them.

The newbie window renews itself every semester for in-class conversations. When you start a new class, for the first week or two it’s totally fine to start talking to the person sitting next to you. You should absolutely take advantage of this because once you’ve started one conversation with someone, you can sit next to each other every class and chat before the professor comes in. This is a great opportunity to make friends you know you’ll get to see again.

When it comes to having those first conversations, it will never not be awkward. That’s just a given. The key is in realizing that awkwardness can’t kill you. Talk about what you find interesting. If you don’t click with the other person, it’s fine. The world won’t end. There are plenty more friend-fish in the platonic sea.

As much as you should be trying to talk to as many people as you can, that doesn’t mean you should be talking to everybody. If someone is sending out “leave me alone” signals, then leave them alone. These signals include wearing headphones, reading a book, and glaring at you when you try and talk to them. If someone isn’t feeling social, that’s their right.

You’re trying to make friends for you, not someone else. So if you’re obsessed with something, talk about it! If you communicate mainly in sarcasm, then snark away! If they don’t like it, it’s no problem, you wouldn’t wind up friends with them anyway. Shake it off and try again with someone else.

If you’re getting along really well and you think you might like to be friends, get contact info. Just ask something like “Hey, do you have a [insert social media here]?” and get a way to communicate with them. If this sounds like dating, it’s because that’s sort of what it is. You’re trying to keep them in your life long enough to figure out if you like them.

8. Reach out that night

This isn’t a hard and fast rule, it’s just a suggestion. The longer you wait to reach out, the more likely it is they’ll have forgotten who you are. You don’t have to set up a time to hang or anything, just chat a bit. If you don’t have time to chill any time soon, keep reaching out every couple days on social media. This is mostly just to make it so that when you do have time to hang, you’re fresh in their memories and not some weirdo they think they maybe met once ages ago.

If you’ve been starting conversations with strangers every day, chances are you’ve accumulated a few friend possibles. Try and hang out with multiple people at the same time. This has many uses. First, if it turns out you don’t actually get along well with one person, the other people can act as a buffer. Secondly, nobody gets any ideas about anything being a date. And thirdly, you create the beginnings of a friend group.

Some people are natural connectors. You know these people. These are the people who seem to know everyone everywhere, who are always hosting parties, who have the energy of a million energizer bunnies, and who seem like they could totally make friends with a brick wall. I’m not asking you to turn into that person. But the point is if you want to make a lot of friends quickly, you befriend a connector and other friends come with them. If you don’t have the luxury of befriending a ready made connector, you’re going to have to become one yourself and connect people with each other.

Being friends online is great, but if you want to make a friend group that will really support you during your college years, you’re going to want to hang out IRL too. So take action and find something cool to do on campus (there will almost always be something cool happening) and invite some people to go with you and check it out! Or if nothing strikes your fancy, invite people over for a movie night or a potluck or whatever you feel like throwing together. Being together face to face will help the entire group bond.

This is something people forget to do a lot, and it’s one of the most important parts of making friends. Remember that everyone there is going through something pretty huge, starting college, just like you. Friendship isn’t a one way street. Try to get to know them, their interests, their passions. Everyone likes talking about themselves, and when you’ve just started college, everyone has a lot to talk about. Remember, half the point of college is getting to know interesting people you wouldn’t meet otherwise. If you make sure you’re there for people right from the start, you’ll build friendships that can last your whole life.

Don’t be afraid to be the one to make things happen. Start conversations, make plans, push! Yeah, it’s hard work and you shouldn’t have to do all of it. People should be reaching out to you and inviting you to things too. But this isn’t tips for how other people should make friends, this is tips for how you can make friends. And the basic fact is you can’t mind control other people into doing things. If you want something to happen, take action. Yeah it might not work out, but at least you did something instead of just sitting and hoping.

This is a surprisingly rare trait, but it’s an incredibly important one when it comes to making and keeping friends. Just showing up when you’ve made plans. It’s important to show that you’re willing to put effort into being friends with someone, and it’s a sign of respect for their time to show up when you’ve said you will.

Raise your voice! Tell us your stories about making new friends in the comments below!