LDR: Is the Relationship Worth the Distance? 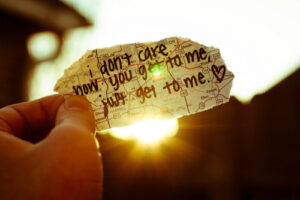 First off, you must understand that your long distance significant other’s schedule cannot revolve around yours. He is going to be experiencing college the same way you are. He is going to be learning new things, meeting new people, and experiencing all kinds of things that he’s never even thought of before. You have to give him time to do these things on his own. Just because you aren’t there doesn’t mean that he has to plan his entire day, week, and month around what you want him to be doing. It’s not fair to him that you have time to talk when he’s going to watch a game with his new friends.

Second off, it’s not fair to you for him to blow you off. He may not be able to talk between your class breaks, but he can sure enough set some time aside to chat with you. He also needs to allow you to experience college as well. You’ll be doing all kinds of new things as well, and if he’s not allowing you to do those things then that may be a sign of a control issue, which opens an entirely new can of worms.

Maintaining balanced communication is extremely important. Each of you has to put effort towards communicating and making things work. There are plenty of ways to make communicating and talking to each other easier. Skype is a great tool and is very useful when it comes to long distance relationships. It gives you the chance to actually see who you’re talking to. Because of this, you can both include each other in a lot of aspects of your new lives, such as showing each other your dorm rooms or other things. If you can’t use Skype, there’s always the classic phone call. It can be really comforting to hear each other’s voices. And of course, there’s text messaging which can be done throughout the day. Be careful not to rely on text messaging though. Short texts here and there are fine, but don’t try to have every conversation over text messaging.

Calling and texting your man are perfect ways to include him. But on a night out with the girls, it’s completely fine to leave him at home. You can tell him that you’re going out but leave him assured that there is nothing to worry about. When you do go out then, don’t drunk text him every 30 seconds. There’s nothing that will worry him more than you belligerently texting him. So while you’re getting ready, let him know that you and the girls are going to happy hour and tell him you’ll give him a call later. He’ll appreciate your call later more than he’d appreciate constant drunk texts.

Everyone likes surprises and there’s nothing wrong with sending a little surprise his way every so often. Obviously we’re all on a college budget, so it doesn’t have to be anything crazy. Sending him a little care package of his favorite candy or a “Thinking of You” card is sure to make his day. It’ll show him that you care about him and are still thinking about him. In turn, you’ll make him feel better about the distance and this could make things a lot easier in the long run for you as a couple.

Long distance relationships are tough, there’s no doubt about that. But there are small things you can do to make sure he knows you’re thinking of him and that you care. Just keep in mind that school is more important than any boy. You are paying and going to college to get an education and a degree. If you’re relationship is taking away from your studies, you may want to re-evaluate how important you think that relationship is. The LDR isn’t necessarily as dreaded as it seems though, especially when that relationship is worth fighting for.

What do you think about long distance relationships? Have you ever been involved in one, or would you ever get involved with one? Leave your comments in the section below!