Reasons To Love Guys With Tattoos 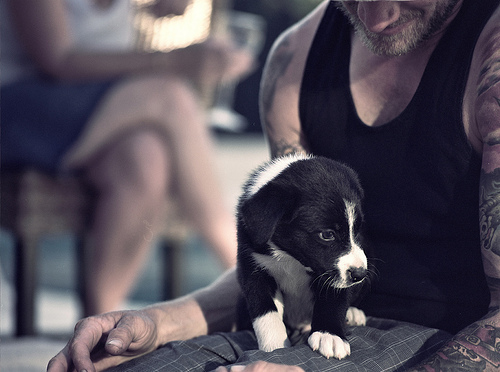 What do Johnny Depp, David Beckham, and Colin Farrell all have in common? Ink. But if you immediately thought of their rugged good looks you’re not wrong there either, and we beg the question as to whether the two factors are related in more ways than the average girl gives them credit for. What makes tatted guys so intriguing? As college girls we know there is more to guys than surface qualities, and tattoos serve as a permanent reminder that there are deeper meanings that offer more than what meets the eye.

They’re not afraid of commitment

Nothing screams commitment like a good face tattoo. But location aside, getting inked is a form of permanent self-expression or dedication. Guys who are comfortable with permanent and public signs of personal symbolism are, by definition, keepers. While having tattoos does not necessarily equate with being more inclined to get into a relationship, the foundational qualities of a deep and meaningful connection are there, somewhere under the ink. What’s sexier than a guy who is so comfortable with permanence that it goes further than skin deep?

They’re in touch with themselves

When it comes to the universal rule that there is nothing sexier than confidence, the same holds true when it comes to the unrestrained boldness that it takes to get an eternal symbol on your body. Tattoo enthusiasts consider it an art form that takes a lot of time in planning and execution to create the perfect body art that conveys both personality and sentiment. When guys are not afraid to be open with aspects of their life that they find meaningful, the sense of emotional pride mixed with a dash of vulnerability is the perfect recipe for sexy.

On a scale of 50 Cent to the rabbit-holding hipster in the State Farm commercial, the average guy with tattoos probably falls somewhere in the middle when it comes to being in tune with their emotional side. Guys who outwardly express emotions break the mold of the typical sports fanatic, hyper masculine college guy, and girls love a guy who stands out.

Disclaimer: having tattoos is not to say that a man is emasculated by his comfort with emotions, because in actuality tattoos have been regarded for centuries as a sign of masculinity. Historical contexts over the centuries have shown that tattoos serve as a middle path between raw masculinity and sentimental expression: Roman legionnaires were tattooed with SPQR, which stands for Senatus Populus Quel Romanum, to signify their rank in Rome’s military forces; Sailors in the 18th century got tattoos when they arrived home after major voyages; Many indigenous cultures today tattoo adolescent boys to signify their transition to manhood in the ranks of their tribe or community. At Every College Girl we know that college is a place to find yourself – and we know that tattooed guys are doing just that, in their own way, and they’re not afraid to express it.

As arguably the most controversial form of art, tattoos are not for the faint of heart. So the guys who are comfortable becoming their own canvas, both literally and metaphorically, should have a special place in all girls’ hearts. Art implies depth, range of emotion, layers of sentimentality, and also an undeniably attractive edge. Every guy, and every tattoo, is unique, and just like art, they should be appreciated for their unique and distinct qualities that make them who they are. Because, ultimately, that is exactly what we want in return from them.

Do you like tattoos? Who’s your favorite inked guy? Let your voice be heard in the comments section below.