Sorority Recruitment 101: The Basics You Need To Know 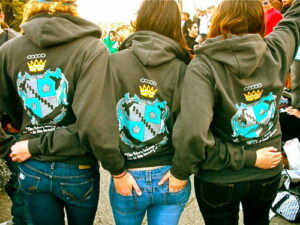 Congratulations incoming freshman ladies, you are now officially what any sorority sister would consider a “Potential New member” (PNM for short)! If you’re not a legacy, all that means is that you can potentially become a new member of a sorority after going through sorority recruitment.

If you don’t have any family that is already involved in Greek Life, you may have no idea what any of it means and it can be extremely confusing. If you’re considering going through Recruitment, we’re going to attempt to break down the basics to help you understand what you may be getting yourself into.

For starters, if you are considering going through Recruitment or at least getting to the end of this post, there are a few terms that you are going to need to be able to understand. We’ll begin with a few of the basics:

Now that you know what some of the basics mean, you can begin looking into the recruitment process. It’s important that you check out what sororities are on your school’s campus. Even if the letters are the same, every sorority differs from campus to campus. There are different sisters that make up each chapter, so it’s best to look into what each sorority represents and then check out their chapter website for your school.

After you’ve decided that you want to go through sorority recruitment and you’ve looked into the different sororities on your campus, you’ll soon begin “recruitment week.” This week is going to be exciting, stressful, and potentially emotional at times. Before you even go into your first party, it is EXTREMELY important to remember to go into each party with an open mind. Just because your roommate or best friend wants a certain sorority doesn’t mean that sorority is right for you. Once you have that clear and you begin going to parties, you’ll be able to meet the sisters and learn about their sisterhood. Keep in mind, many sisters are just as nervous as you are. Even though they are sorority women, they’re still real people. That being said, be honest with them and genuinely ask questions if you have them. That’s what recruitment parties are for.

Here are a few questions that you may want to consider asking when going through sorority recruitment:

Hopefully, you may have a better understanding now of what to expect when going through sorority recruitment. This can be a very stressful time but it’s all worth it in the end. Sorority women have a bond with their sisters that is unexplainable to anyone who isn’t involved in a sorority. It’s not a matter of “paying for your friends.” On the contrary, you do pay dues but the money you pay goes towards socials and events, as well as being able to put on fundraisers and other activities to raise money to help others. A sorority isn’t for just four years, it’s for life.

What do you think about sorority recruitment? Is it something you’ve considered getting involved in or may be considering after reading? Let us know in the comments section below!