A Personal Story From A Fellow College Girl: What Really Happens With A DUI? 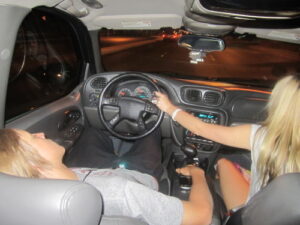 To give you an exact date, it was May 28th, 2011. It was around 2 or 3 in the morning. I had been at one of my sorority sister’s houses for a party. It was her little’s birthday and her little was in my pledge class and was a very good friend of mine, so of course I was there. I had a few beers and ripped quite a few shots. It was nothing more than I would normally drink, so I figured I was still good to go. A friend asked if I could take her somewhere because everyone else was hammered and stumbling. Being that I’m good friend, I agreed without any hesitation whatsoever. I thought I was good to go.

I backed out of the driveway, but I don’t remember driving down the street or out of the apartment complex. At the end of the apartment complex, there was a light. It was red, so I stopped. When it turned green, I started to make my left turn into the closest lane. It was a two-lane highway. As soon as I made my turn, I felt the car shift and heard a loud popping noise. My friend, sitting in the passenger seat, looked at me. This is when I realized I was drunk. She reached for my arm and said, “Lauren, a car just hit us. We just got into an accident.”

My brain couldn’t process what was happening fast enough. My destination was literally a mile down the road, how could that have happened so quickly? There was glass everywhere. I knew it was wrong, but I thought that if I could get to where I was supposed to be going then I would be ok. So I did. We pulled into the parking lot of where she wanted to go. I jumped out of my car to see what happened. The entire passenger side of my car, my beautiful, red Mustang convertible, was smashed in. My friend started to try to open the door; she struggled for a minute then got it open. To this day, I wish she wouldn’t have, but it’s not like anything was going to fix my car. She immediately called one of my sisters who lived down the street. Within what felt like seconds, three of my sisters were there. One grabbed my insurance information and my phone, one ran into a nearby gas station to get water, and the other one grabbed me. It was my pledge sister. It was her birthday and I ruined it. She kept saying, “Why would you drink and drive? Why didn’t you tell someone you were leaving?” I just kept crying, not knowing what to say.

The police showed up. One cop performed a field sobriety test on me while the other met up with the car that was in the accident. All my sisters could do was stand and watch as I failed it miserably. Then I got arrested. He cuffed me and put me in the car. He let me sit shotgun, which everyone still thinks is odd. On the way to jail, he told me that he appreciated me being so honest. I didn’t ever think to be anything but. When we got to jail, I did a breathalyzer and blew a .18. The cop was literally stunned that I blew that number, got behind the wheel, and I was sitting there having a normal conversation with him. Then he put me in jail and I sat there for the next 14 hours wondering if I’d ever get out.

It’s now July 2012. In the past year, I’ve paid $2,500 for an attorney to fight for me in court. I was charged with a DUI and a hit and run. The hit and run was charged incorrectly, so they said if I pled guilty to the DUI then they would lower my BAC to a .08 and drop the hit and run. So I did. Before court though, I had to pay $2,300 for my bail, $7,000 for drug and alcohol classes required by the state, over $400 in taxi services to get to work and everywhere else I needed to go. To get my totaled car out of the impound was $235, but of course it was a waste because the insurance company wouldn’t cover getting my car fixed, so we sold it for a few hundred dollars, then had to buy a new one, which was another $14,500. Before I could drive my car, I had to get my license reinstated, which was another $100. My college also required that I take a $100 alcohol class. There are a few things that I didn’t have to do because I was doing something similar, or I just got a good deal on it because I knew someone.

Besides all of the costs of the DUI and a new car though, I’m still paying for it. I’m now an “assigned risk” to my car insurance company. The insurance company I had at the time of the accident didn’t drop me, because I was on my parents policy, but my mom said they suggested that my parents take me off the account. So basically, they were dropping me but in a nice way. I was finally able to find an insurance company that would take me, so I’m paying $2,000 every six months to drive. There are also other random costs of things here and there that were a result of the DUI, but I basically paid around $30,000.

The reason why I decided to write about this and put it out in the open is because I don’t want anyone else to have to go through this. I know people will, and my story isn’t going to change anything. But if I can help at least one person to make a better choice than I did, then I’m happy. Personally, my accident was by no means the first time I drove drunk. And I know plenty of other people that drive drunk frequently, with or without consequences.

When you see commercials that say “DUI: You can’t afford it,” believe me, you can’t. If it weren’t for my family being able to help me out, I never would’ve gotten through everything. I paid more for a DUI than I have for the past two years of college put together. The moral of the story is obviously don’t drink and drive. There is NOTHING wrong with taking turns being a designated driver with your friend. Also, iPhone’s have a free app called “Taxi Magic.” Just type in where you are and it will find nearby taxi services for you. If you’re drinking, it’s perfect. Trust me, I’ve learned to abuse that app. It’s much easier to pay $50 for a taxi than $30,000 for a DUI. So next time your out with your friends, and you or someone with you tries to drive, check yourself before you wreck yourself. 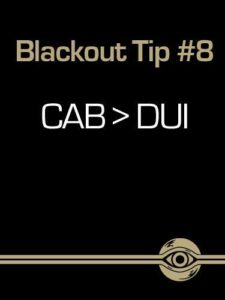